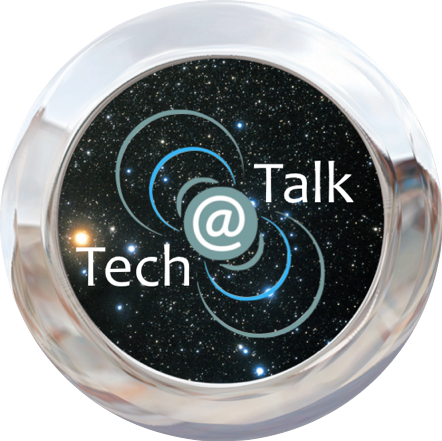 To solve these problems, we need to be able to find pulsars in a "blind" search: detect their pulsations without any prior information on how fast they are spinning. The problem is that a typical pulsar is so faint that it can spin millions of times in the time between Fermi detecting two of its photons! 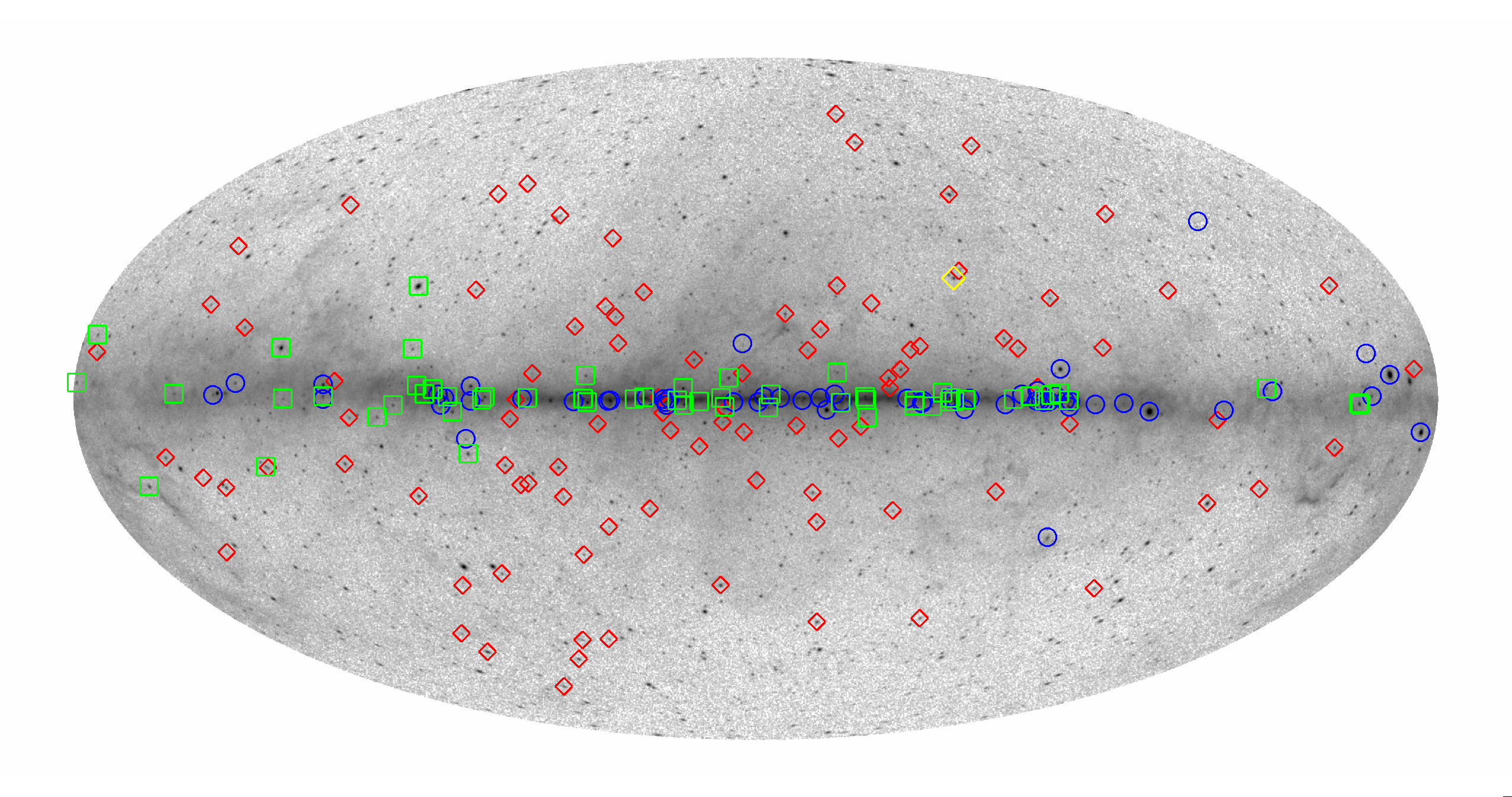 Fermi's view of the gamma-ray sky, with pulsars highlighted.
Pulsars in green and yellow boxes were discovered in Blind Searches.


To get an idea of just how difficult these signals are to find: imagine that you have been challenged with clapping along to a song without missing a single beat. Except the song lasts for 10 years. And it's slowing down at an unknown rate. And you can only hear one "beat" each day.

The only option is to try out every possible tempo (with a computer!) and see how well it fits the beats you have heard. The problem is simply that there are so many possible tempos that it would take even the world's fastest supercomputers hundreds of years to find a gamma-ray pulsar like this!

Fortunately, there are a couple of tricks we can play to speed things up. The first is a clever bit of maths, discovered by Gauss in the year 1805, called a Fast Fourier transform. The second involves a bit of cheating in the clapping game, effectively restarting the song every now and again so that we "only" need to keep clapping at the right tempo for a few weeks at a time.


Even with these tricks, the computational power required for these blind searches is enormous. And that's where you can help us! Since 2011 the blind-search effort for Fermi pulsars has been running on Einstein@Home, the distributed volunteer computing system. This works by harnessing the donated power of more than 50,000 volunteers' computers across the globe. We send out our data and our search algorithm to the Einstein@Home computers, and when they are not otherwise busy they perform our searches for us! Volunteers whose computers make new discoveries (radio pulsars, gamma-ray pulsars or perhaps even the first continuous gravitational waves?) are rewarded with a signed and framed certificate!

With the Fermi LAT, we have the first gamma-ray telescope sensitive enough to blindly search for gamma-ray pulsars, and the results have been spectacular! The first blind-search discovery was made less than 2 months after Fermi's launch, and now more than a quarter of the 200 or so gamma-ray pulsars that Fermi has detected were found by blindly searching for gamma-ray pulsations. These include several "glitching" pulsars whose spin rate occasionally jumps unpredictably, and the "black widow" binary millisecond pulsar with the shortest known orbital period. Nearly all of these remain undetected by radio telescopes, without Fermi we would never know they were there! 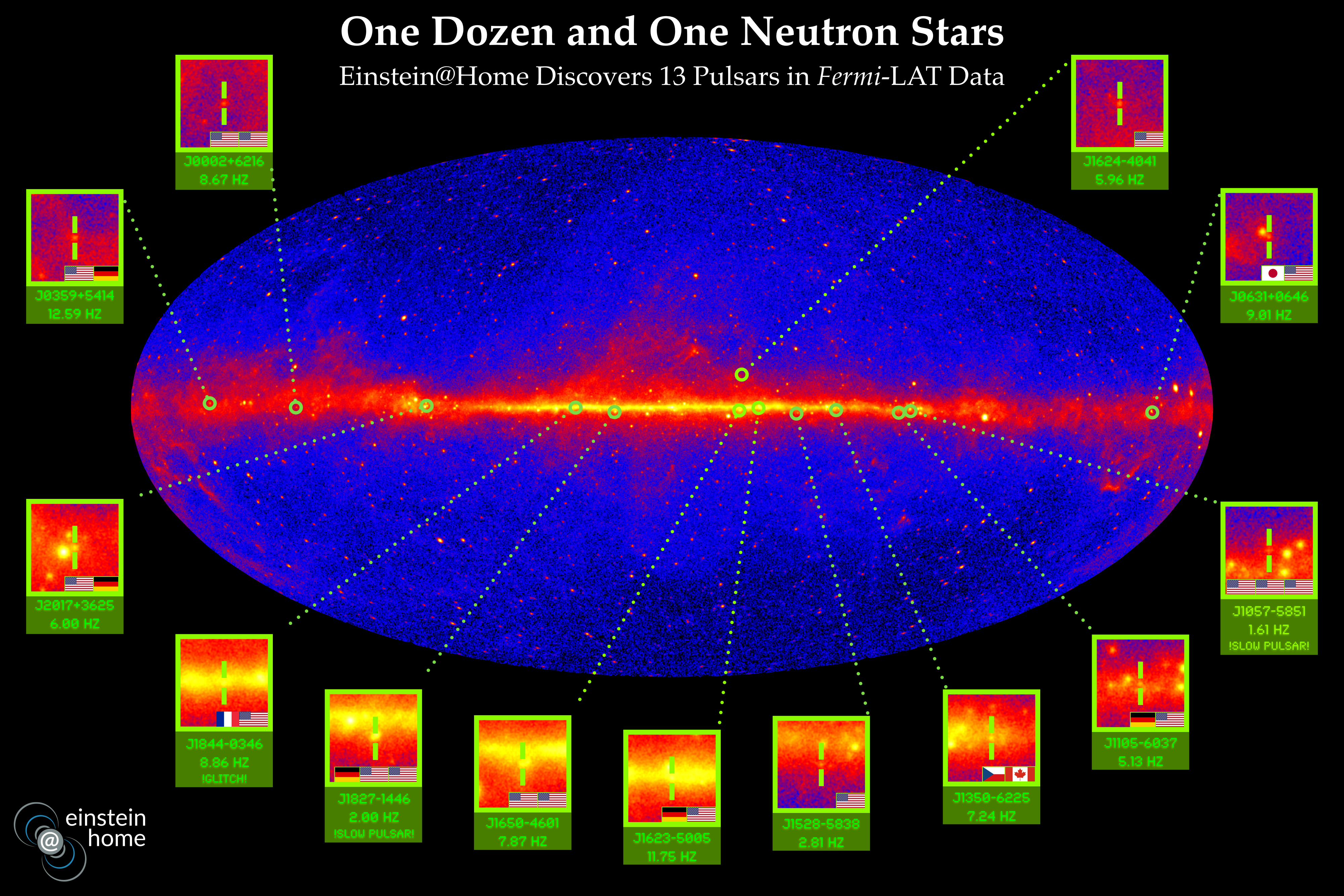 Thirteen gamma-ray pulsars discovered by Einstein@Home,
and the nationalities of the volunteer who discovered them.


If you would like to find out more about the pulsars discovered by Fermi pulsar discoveries then check out the links below, and stay tuned for more announcements soon! If you would like to help us out then head over to einsteinathome.org to sign up your devices!