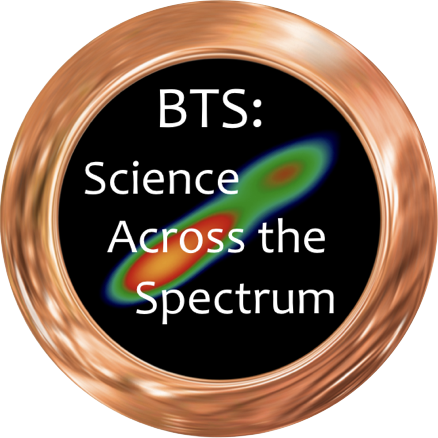 Behind the Scenes: Doing Science Across the Spectrum

The gamma-ray sky seen by Fermi is lit up by blazars, the most extreme examples of super-massive black holes swallowing gas at the centers of large galaxies, called Active Galactic Nuclei (AGN). A tiny fraction of the charged particles near the black hole are funneled by magnetic forces into narrow jets that are propelled outward at 0.98-0.999 times the speed of light. Despite the low density of particles in the jets, the electrons gain so much energy that they produce gamma rays with a luminosity higher than that of any other object in the universe that shines for more than a few minutes. (Only the short-lived gamma-ray bursts produce more energy.) 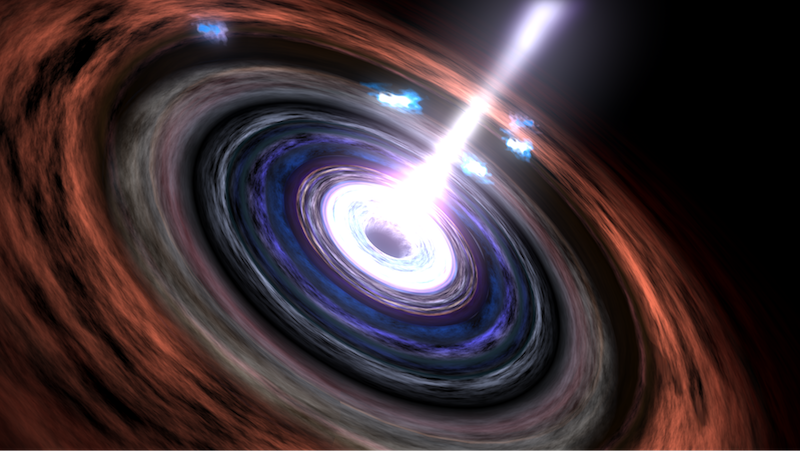 Artist's concept of an Active Galactic Nucleus (AGN) with a jet.
Blazars are those AGN for which the jet is pointed toward Earth.
Credit: NASA/Goddard Space Flight Center Conceptual Image Lab


Astrophysicists learn about how these exotic jets form, energize particles, and radiate such an extreme amount of light by studying not only the gamma rays that they produce, but also their light at other wavelengths. While Fermi can measure the changing brightness of gamma rays – the most energetic form of light – other telescopes are needed to observe their radio, infrared, visible, ultraviolet, and X-ray emissions. For example, the Swift observatory measures the brightness of visible, ultraviolet, and X-ray light of many blazars at different times. Seeing whether the brightness at these wavelengths changes along with the gamma-ray brightness is an important diagnostic for figuring out what's going on in the jets.

A particularly powerful technique uses data from the Very Long Baseline Array (VLBA) to make images of the radio emission from the jets. While Fermi and other telescopes can measure how the brightness changes with time, only the VLBA has enough resolution to see the jet in detail. And what these images reveal is spectacular! Bright spots ("blobs") appear to move away from the black hole at speeds greater than the speed of light. Although this is an illusion that comes from our measurement of time being different from that in the blob, it requires that the blob move at a speed very close to that of light. At such high velocities, a jet pointing almost right at us beams light in our direction to make the jet extremely bright, while the jet on the other side beams its light away from us, and so is too faint to detect. The movie below, made from actual data, shows a jet in action, with new superluminal blobs created near times when we see outbursts at gamma-ray and other wavelengths. In the movie, you can see bright blobs move northward (upward on your screen). Outbursts of gamma rays generally occur as a new blob emerges. But not all new blobs cause gamma-ray outbursts. Astronomers don't know why this is and hope that by observing more events of this sort they can figure out exactly what needs to happen in a blazar to make gamma rays.

Movie showing how the jet in the blazar 4C 21.35 has changed with time.
Blobs that appear to move faster than light appear.
Credit: Dr. S Jorstad


Interpretation of the observations requires the development of theoretical models based on gravity, orbits, and our knowledge of how particles and magnetic fields behave. Turbulence scrambles the magnetic field into a spaghetti-like pattern. But there is partial order to the field as well, which can be explained if it is both twisted by rotation and compressed by shock waves. Both turbulence and shock waves are known to energize charged particles like the electrons that make the light at the various wavelengths in blazars. It's probably the case that everything that can happen in such a high-energy situation does happen. The cartoon below sketches the various phenomena that we think occur in a blazar.

Sketch of the complex processes in a blazar. The gamma rays may come from the zone where the jet accelerates to near-light speed, turbulent regions, a standing shock, or a moving shock, or all of these. The photons that electrons in the jet knock up to X-ray and gamma-ray energies can come from the accretion disk, hot dust in the outer disk, hot gas clouds, or the jet itself. The scale in light years, shown on the bottom, increases by ten times with each tick mark so that everything will fit in the sketch.
Credit: A. Marscher, 2018