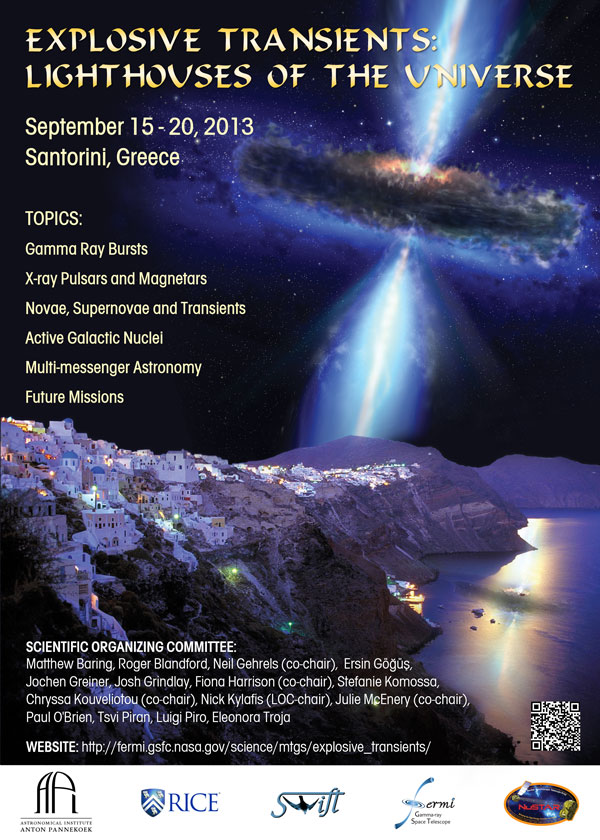 It is a pleasure to announce the first combined Swift/Fermi/NuSTAR conference covering recent advances in observations and theory of explosive transients in high-energy astrophysics (HEA).

The combination of Fermi and Swift missions has provided a wealth of information in GRBs and Magnetars in the last four years. The very broad spectral coverage has led to the discovery of new spectral components in GRBs challenging our standard picture of the prompt emission models. The Fermi/GBM has measured an unprecedented set of magnetar bursts with a high-resolution timing and spectral coverage, shedding new insights on their emission mechanisms. NuSTAR is collecting exciting new observations imaging the high energy sky for the first time between 6-80 keV. The Swift and Fermi mission source catalogs provide a hotbed of new discoveries and exciting new information on diverse source populations.

All these new observational results are complemented by huge theoretical efforts, presented here to assist our understanding of these phenomena.

This meeting intends to devote approximately one or half day per subject area, addressing both observations and theory, accompanied by healthy and vigorous discussions/debates at the end of each day in the beautiful environment of the Santorini Conference Center. Astronomers and physicists, working throughout the entire electromagnetic spectrum and beyond, will come together to critique recent observations, connect new phenomena and establish fresh collaborations to improve our understanding of the underlying mechanisms responsible for explosive transients.

On Friday afternoon, 20 September 2013, the Swift, Fermi, NuSTAR teams will hold a programmatic meeting for team members, open for the conference participants as well, to prepare for the next Senior Review of the operating NASA missions, due in 2014. The teams are welcoming suggestions on how to serve the broader community better, as well as ideas on new scientific projects combining more than one mission. Given the broad international and scientific spectrum of the Santorini meeting, this forum is ideal for providing input for the teams' future strategic planning.

We are looking forward to hosting you in the beautiful Santorini island.