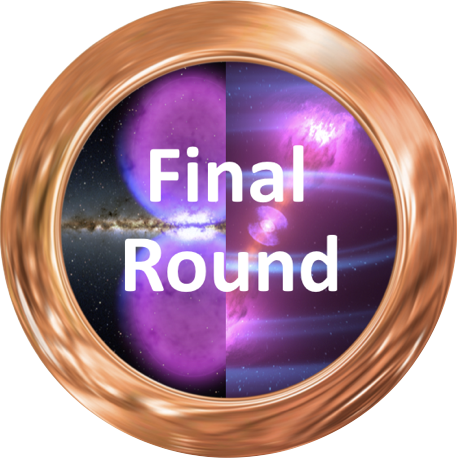 It was no easy task, but you did it! We find it very very difficult to decide between our many incredible science results and the lovely figures that they inspire. Thank you for voting in the first three rounds and determining our two finalists. They are the entirely unpredicted, 25,000 light-year tall, gamma-ray "bubbles" above and below our Milky Way galaxy and the two merging neutron stars responsible for the first detection of light associated with a gravitational wave event. They won 60% and 76% of the votes in the semi-final to move past New Clues to Dark Matter and Starquakes in Magnetar Storm, respectively.

Over 70 professional scientists participated in seeding our starting 16 candidates. In the first two rounds, your votes frequently went counter to their preferences - three of eight matchups in the first round and one of four in the second round were 'upsets'. So while our first and second seeds made it to the semi-finals, they were joined there by our 12th and 14th seeds. Details of past results are posted below and at this link.

Six weeks and thousands of votes later, we are going into the finals with our top two seeds. Which result will prevail? Are you going to pick the majestic echoes of past turmoil in our home galaxy? Or a more distant event that told us how the gold in your jewelry was made? It is all in your hands. Be sure to vote in the finals now and stay tuned for the announcement of our winner. Voting in the finals will close on Aug 2nd at 10am EDT.