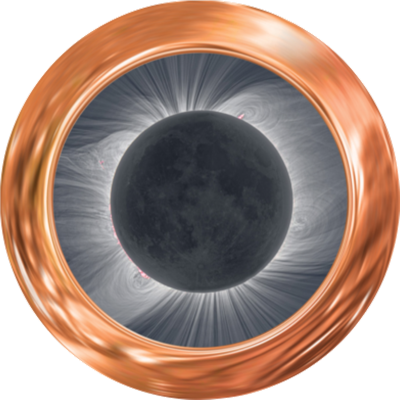 Most of what the Fermi Gamma-ray Burst Monitor (GBM) sees comes from the Sun. Both the charged particles that stream directly onto Fermi and the gamma rays that reach Fermi as a result of interactions between these particles and the Earth's atmosphere contribute over a thousand counts per second in each of GBM's 14 detectors. These counts form a background of noise and present a challenge to doing science with GBM. The magnitude of this solar-induced backdrop depends on where Fermi lies in the Earth's magnetic field and which way the detectors are pointed, and varies by a factor of two or so over the 90-minute orbit of Fermi around the Earth. 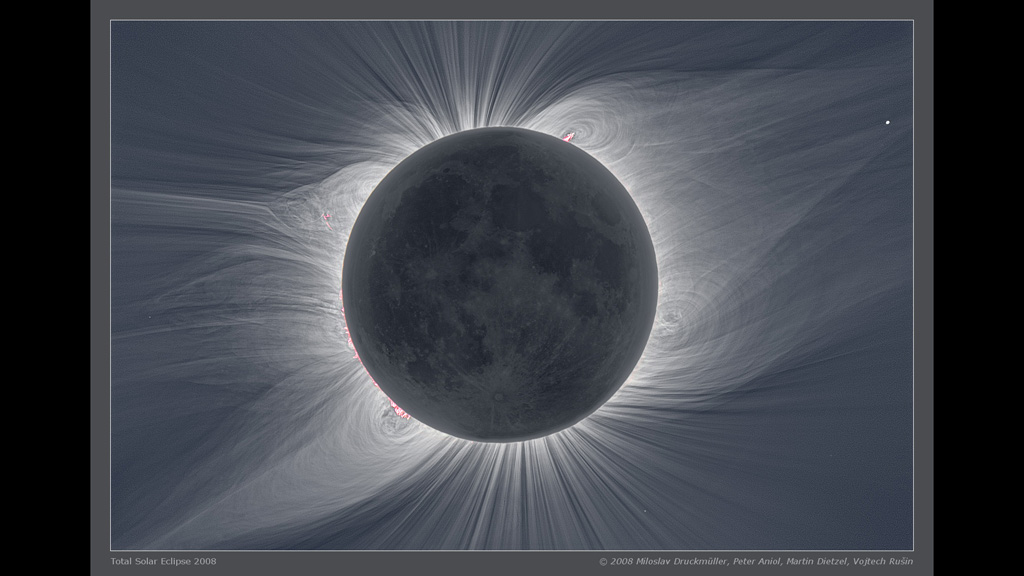 Charged particles streaming off the Sun follow the Sun's magnetic field lines.
These particles form some of the structures we see in the Sun's corona.

For GBM to be an effective monitor of the gamma-ray sky, it needs to be able to pick out interesting events above this varying background. Software algorithms seek sharp increases in count rates over time intervals that are short compared to background trends, triggering and alerting scientists when such an increase is registered in two or more detectors. GBM has triggered over 6500 times in Fermi's 10-year mission. Examining the GBM data allows scientists to determine with some confidence what caused the trigger and the origin of GBM triggers has varied over the Fermi mission. 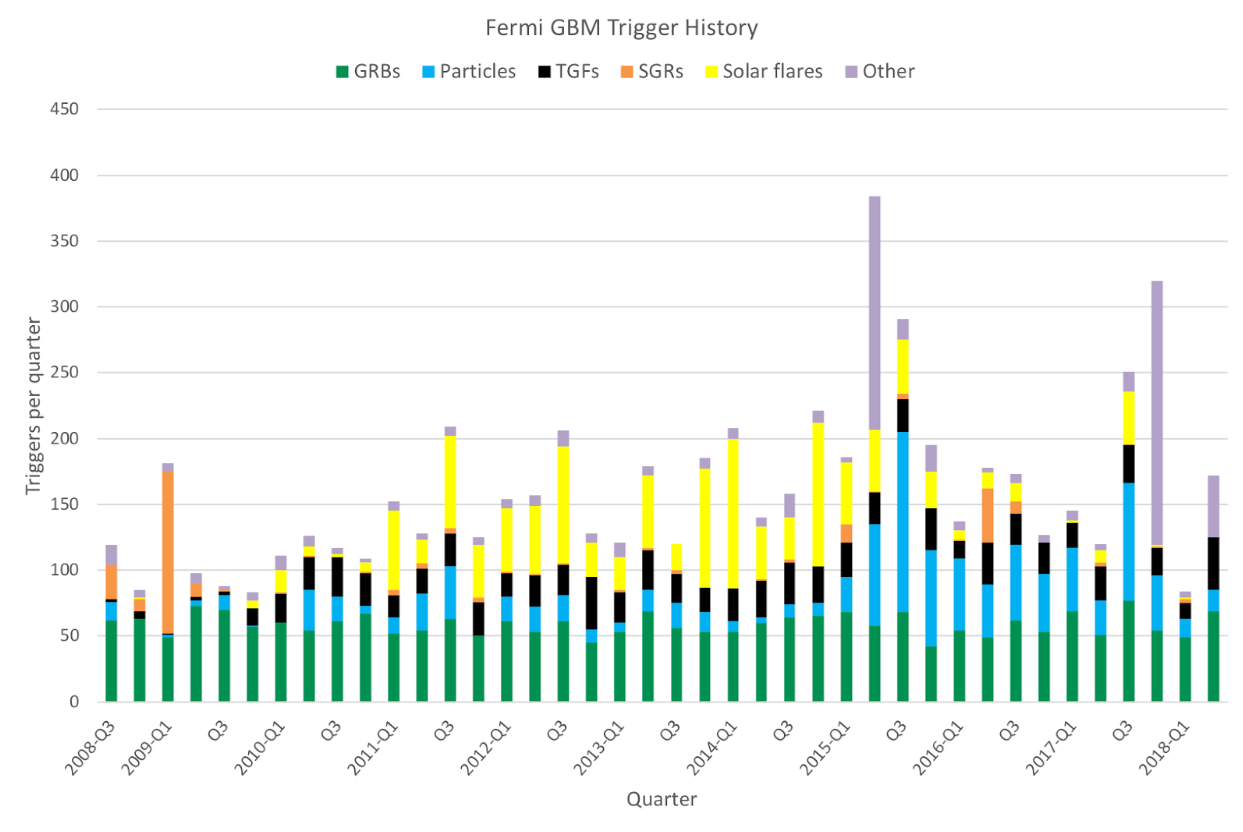 GBM trigger classifications over the first 10 years of the Fermi mission.

Some of these triggers are due to the cosmological Gamma-ray Bursts, others to sporadic bursting sources of impulsive high-energy emission within our galaxy such as Soft Gamma-ray Repeaters or accreting binary systems. GBM even detects gamma-ray flashes from thunderstorm activity in the Earth's atmosphere, known as Terrestrial Gamma-ray Flashes. During the active part of the 11-solar year cycle, the Sun becomes more than a source of background noise to GBM: it too emits high-energy radiation, including bursts of gamma rays that trigger GBM. This has happened nearly 1200 times during the mission, with most of the triggers arising during the most active part of the solar cycle.

High-energy (X-ray and gamma-ray) radiation from the sun has a variety of origins: X-rays from hot gas in the corona, bremsstrahlung gamma rays from electrons accelerated in the solar atmosphere, higher-energy gamma rays from nuclear transitions when accelerated ions bombard the ambient solar material. Because of its broad energy coverage, GBM sees all three of these phenomena, and a solar flare seen in one energy band can look very different from another. 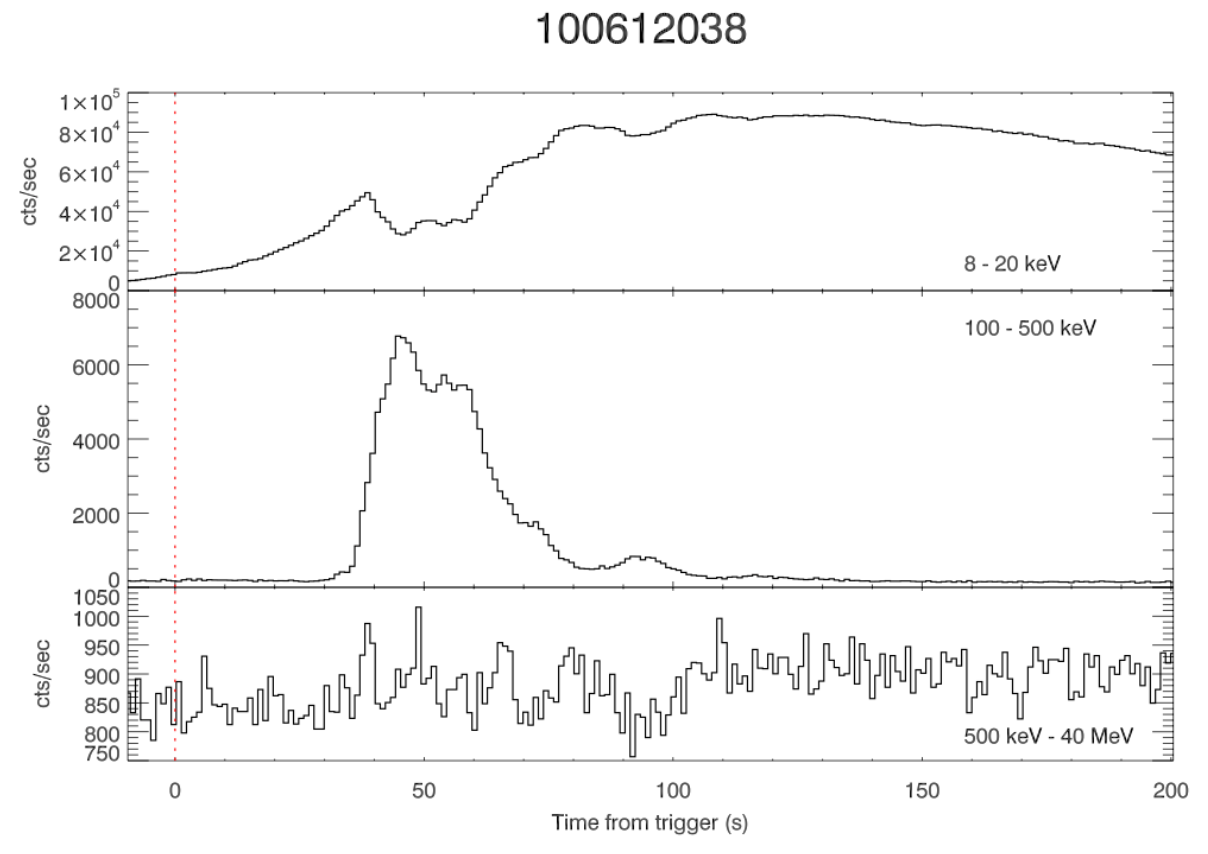