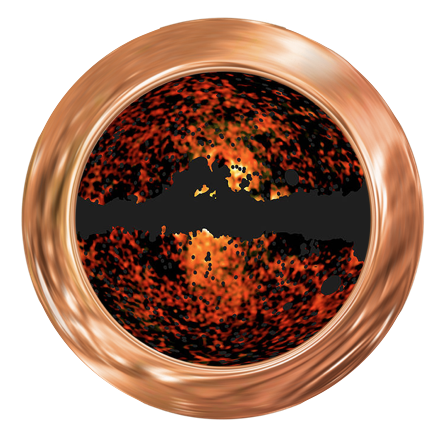 Behind the Scenes: Blowing bubbles in space - the Discovery of the Fermi Bubbles

It was September 2009, and at the Harvard-Smithsonian Center for Astrophysics, my PhD advisor Doug Finkbeiner and his research collaborators were waiting with bated breath to see if the first public data from the Fermi Gamma-Ray Space Telescope would solve a six-year-old puzzle. I was a third-year PhD student, and excited for my first opportunity to work with gamma-ray data.

Back in 2003, when Doug was studying a map of the Galaxy in microwave radiation, he had noticed that there was a peculiar glow of microwaves from the region around the Galactic Center, which didn't agree well with expectations from any known sources. Doug realized that this "microwave haze" could be due to high-energy electrons flying through Galactic magnetic fields, emitting microwave radiation as they went. However, that hypothesis couldn't be confirmed with the microwave data alone, and it left open the question of what was making the electrons in the first place. 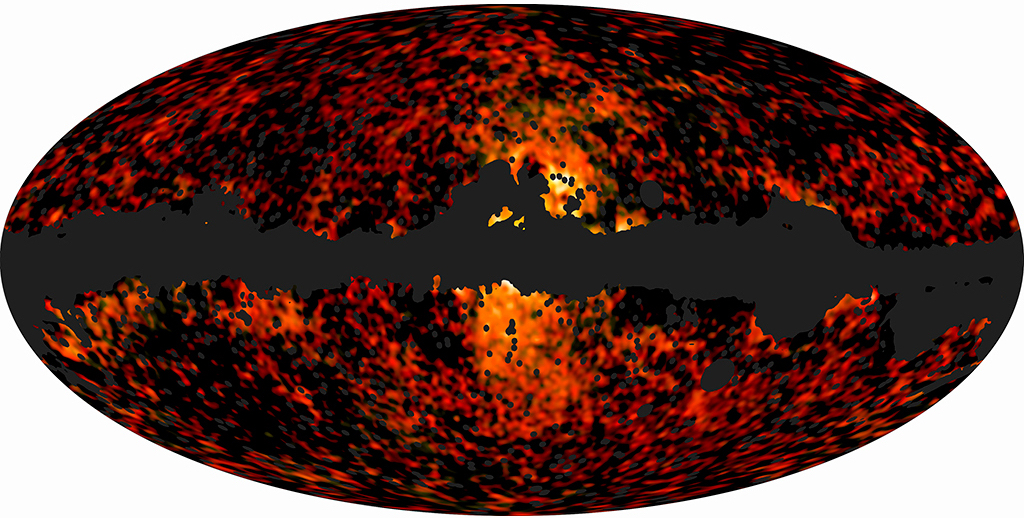 A map of the microwave emission after known contributions are subtracted, as observed by the Planck satellite. The bright yellow/orange colors toward the center of the image indicate the microwave haze, which was first uncovered in data from the Wilkinson Microwave Anisotropy Probe.

Fortunately, if this hypothesis was correct, we would expect those same electrons to occasionally run into starlight photons, and kick them up to much higher energies. Fermi could then observe those high-energy photons, and potentially give us a better handle on where the electrons were coming from. So in 2009, we were very eager to get our hands on the public data from Fermi, and see if we could detect any hints of a "gamma-ray haze", similar to the microwave haze but at a vastly higher energy.

Our team, led by Harvard postdoc Greg Dobler, planned to take the data, make a map of the sky, remove all the known point sources, peel away the expected diffuse emission, and see what was left. And indeed, when the data were released publicly, we found the leftover emission contained a fuzzy blob of bright, high-energy gamma rays centered around the Galactic Center, in much the same region as the microwave haze. Furthermore, it had the same properties we had predicted, based on the hypothesis that the haze came from high-energy electrons. 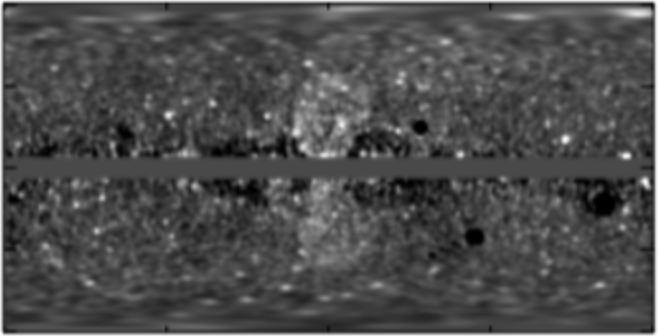 The leftover gamma-ray signal after subtracting a model for the expected diffuse emission. The lighter-colored regions above and below the center of the image correspond to the "gamma-ray haze" - later to be revealed as the Fermi Bubbles.

At this point we were all very excited. I was in Europe at the time of the release, which meant I could start working on the data first thing in the morning, when it was night in the US, and then hand over to my US collaborators when they came online. With this around-the-clock schedule, we were able to spot the "gamma-ray haze" in our results just a few days after the Fermi data became public, and shortly afterward, I described it at a conference for the first time. It was so soon after the release that many people in the audience hadn't even realized the data were available.

In that first pass at the data, we thought we were looking at a fuzzy signal with no particular structure. But as the months went on and more data came in, we started to second-guess that idea. One day, Doug pointed at the outer part of the gamma-ray haze and asked me, "Does that look like an edge to you?"

Indeed, when we did a more careful analysis - led by my fellow graduate student Meng Su - we found that what had looked like a blurry blob was resolving into a sharp-edged, well-defined structure, shaped like two giant bubbles that were joined at the Galactic Center. That changed our ideas about what might be causing this phenomenon - in particular, it suggested that the source of these "Bubbles" might lie at the Galactic Center. 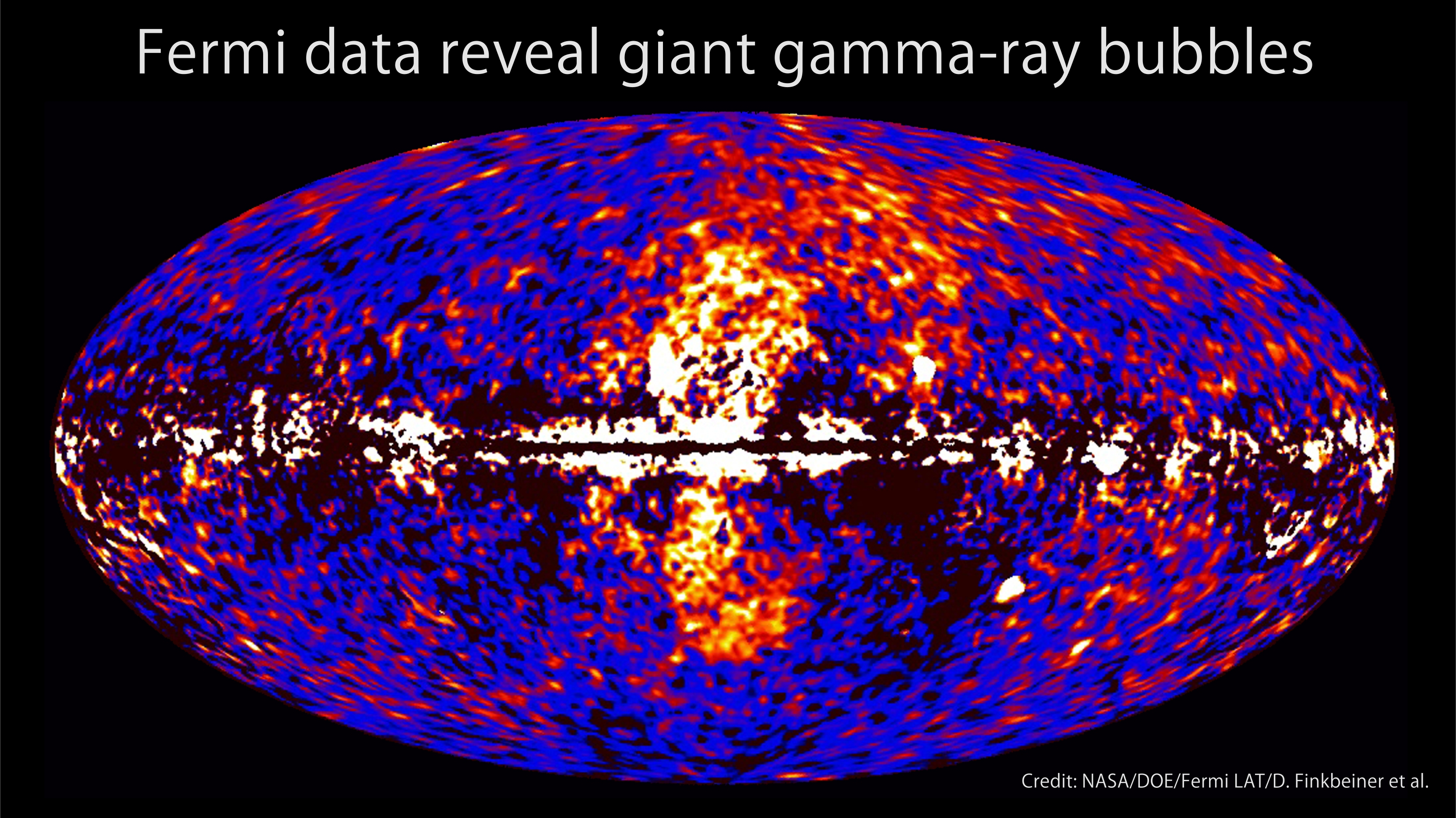 The leftover gamma-ray signal after subtracting a model for the expected diffuse emission, with additional data. The Fermi Bubbles are the bright white/red/yellow figure-eight-shaped structure visible in the center of the image.

The exact origin of the Bubbles remains an open question today. It seems likely they were formed by one or more outflows of gas from the heart of the Milky Way, possibly sourced by the supermassive black hole at our Galaxy's center, or else by a period of rapid star formation. The gamma rays are probably due at least in part to high-energy electrons whipping through the inner Galaxy, as we inferred from the microwave haze, but they may also be partly produced by high-energy protons slamming into the gas between the stars. The Bubbles are huge, Galaxy-scale structures - roughly fifty thousand light years from top to bottom —and they may hold clues to the history of our Galaxy over millions or billions of years.