The Fermi observatory operates primarily in an all-sky scanning survey mode that maximizes observing time while maintaining excellent uniformity. This means that the LAT rarely stares at a single point in the sky. Rather, the boresight of the LAT continuously scans the sky, alternating between the northern and southern hemispheres each orbit. This strategy makes the best use of the LAT's large 70 degree half-angle field of view, and provides 30 minutes of livetime on each point in the sky every two orbits (approximately three hours). 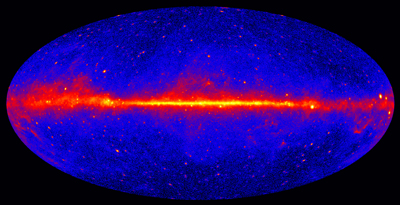 Fermi's survey observations are regularly interrupted during passages through the South Atlantic Anomaly, a region of high particle flux, where the instruments cease data-taking and are commanded into a protected state. This interruption, which primarily affects observations while the observatory is in the southern portion of its orbit, results in an exposure differential between north and south of ~15%. In addition, sky-survey is interrupted by the occasional Autonomous Repoint Request (ARR) of the observatory to observe gamma-ray bursts deemed to be "of-interest" by algorithms running in the instruments' flight software. Finally, on rare occasions, the planned survey mode may be halted to allow a Target of Opportunity (ToO) observation of a particularly interesting astrophysical event. Details of the Fermi ToO observations can be found here. Please note that as of early 2018, both ARRs and ToOs have not been possible as a result of the -Y SADA Anomaly (see link for details).

Listed below are the sky-survey profiles that have been used on Fermi since the start of the nominal mission on August 4, 2008. The file defining the profile is linked to each profile name. Each profile consists of a sequence of 17 entries giving a time (in seconds) and the corresponding angle (in degrees) at which the LAT boresight is rocked north or south of the orbit plane. The profile must start and end at zero degrees. Typically, a profile runs for two orbits, with the observatory rocked to the north for the first orbit, and to the south for the second. However, other cadence profiles have been performed (e.g. the 3 orbit profile test shown below). The effective dates and times for each profile are provided.