During survey observations, the GBM instrument monitors the entire available sky (that remains unocculted by the Earth) to watch for transients. During pointed observations, there may be portions of the sky with poor sensitivity owing to the detector placement that optimizes coverage along the boresight of the LAT, but GBM monitors the whole sky with about 50% duty cycle. The losses are due to occultation by the Earth and passages through the South Atlantic Anomaly when detector high-voltages are turned off. Upon triggering on an event above background, the GBM software analyzes the event characteristics and assigns the event a likely classification and a crude location. If it is a GRB, the GBM forwards information to the LAT for further analysis.

At that time, the LAT begins monitoring the region of the GRB for an increase in gamma-ray candidate events. If it detects a significant increase in these events near the burst location, a autonomous repoint recommendation (ARR) is sent to the spacecraft. The spacecraft can then either accept or reject the request based on the current operational mode. Nominally, the spacecraft will accept the recommendation, and slew to the target loation where it remains pointed for two and a half hours. During periods when the GRB location is occulted, the observatory will track around the earth at 50 degrees from the limb and will meet the GRB location as it emerges. At the end of the 2.5 hour dwell time, the spacecraft resumes the nominal observing timeline.

GBM triggers on about 240 GRBs per year, of which 40-45 are short GRBs. Approximately half of the GBM triggers are within the LAT field-of-view. Of these, the LAT detects about 10%, mostly the brighter events seen by GBM, both short and long GRBs. The Swift Burst Alert Telescope (BAT) has less sky coverage than GBM, but is more sensitive, so that GRBs that trigger GBM, and are visible to the BAT, usually also trigger the BAT. GBM and Swift BAT have just over 30 GRB triggers in common each year, with additional Fermi GRBs detected by Swift when the Swift X-Ray Telescope (XRT) points at Fermi LAT-detected GRBs in search for afterglow detection that then enables optical follow-up and, in many cases, eventual redshift determination. 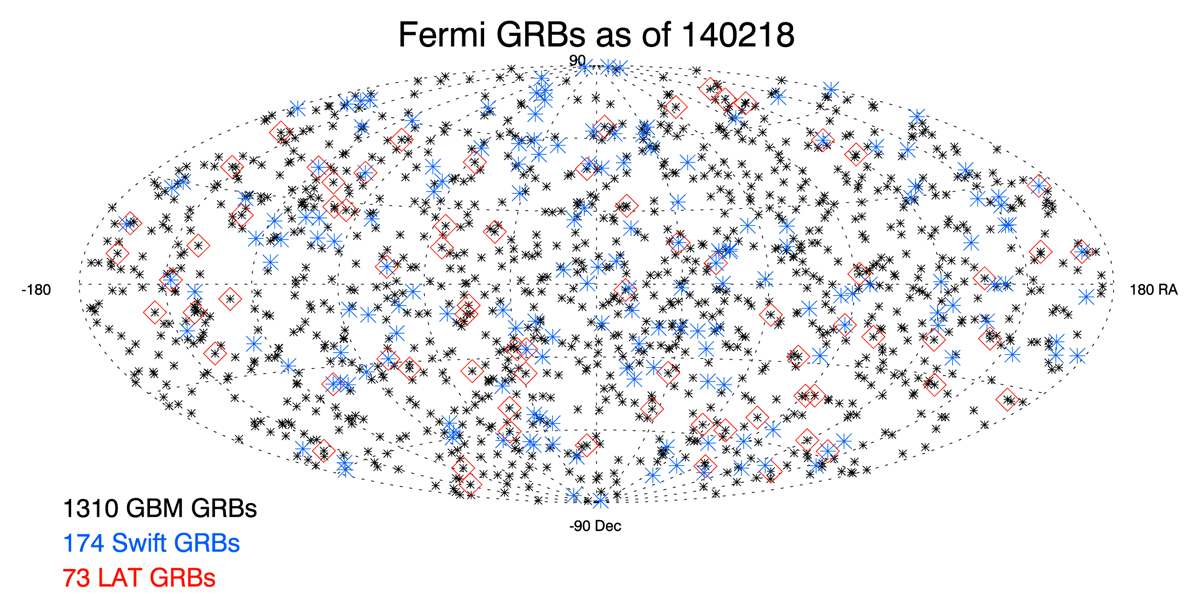 A number of resources are available to learn about the Fermi burst observations: